The 10 Most Mysterious and Wonderful Trees in the World

Trees play an especially important role in enhancing our quality of life in the urban environment. They screen unsightly structures and activities, give privacy and soften the hard lines of buildings. Trees also bring color and contrast into the urban environment. Having trees around, you are ensured with the air quality since trees absorb CO2 and release O2 for us to breathe. They remove dust, smoke and fumes from the atmosphere by trapping them on their leaves, branches and trunks. Just 1 hectare of beech woodland can extract 4 tonnes of dust per year from the atmosphere. Each year, a mature tree produces enough oxygen for 10 people.

Trees in themselves benefit the environment and the landscape, but they are also an integral part of the ecosystem providing benefits to wildlife and biodiversity. Trees, especially older or veteran trees and those in groups or woodlands, provide habitats for native ground flora such as bluebells and fauna, particularly bats, red squirrels and invertebrates.

While providing such benefits to human, some trees share a very long history and are more marvelous than the rest. The trees we bring to you today is the trees that have been capturing people’s attention over the decades. The Lone Cypress is a Monterey cypress tree in Pebble Beach, California. Standing on a granite hillside off the 17-Mile Drive, the tree is a Western icon and has been called one of the most photographed trees in North America. 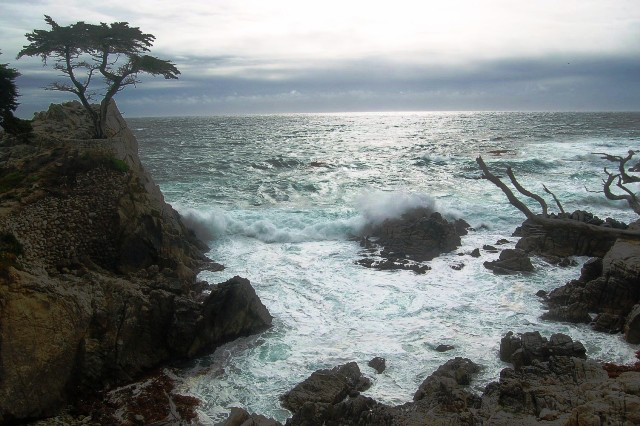 The tree might be 250 years old while it sits alongside one of the world’s most beautiful (and expensive) golf courses. It’s a marketing tool, a registered trademark, a Western icon. This tree is to the Monterey Peninsula what the pyramids are to Egypt, what the Eiffel Tower is to Paris. No wonder its keepers are hoping it will last 100 more years.

If you cruise along 17-Mile Driver, you will see the Lone Cypress and behold the spectacular collision of land, sea, golf and wealth that is Pebble Beach. But you won’t get within 40 feet of the tree. These trees are born from a hobby of a bean farmer by the name of Axel Erlandson. He opened a horticultural attraction in 1947 advertised as “See the World’s Strangest Trees Here,” and named “The Tree Circus.”

In 1945, Erlandson’s daughter and his wife visited the ocean near Santa Cruz, California, where they saw people lined up to pay to see such oddities as tilted buildings at the Mystery Spot. They later suggested that the trees made by Axel could be put into exhibition with people pay to see them if his trees were on a well-traveled tourist route. His roadside attraction, The Tree Circus, opened in the spring of 1947. 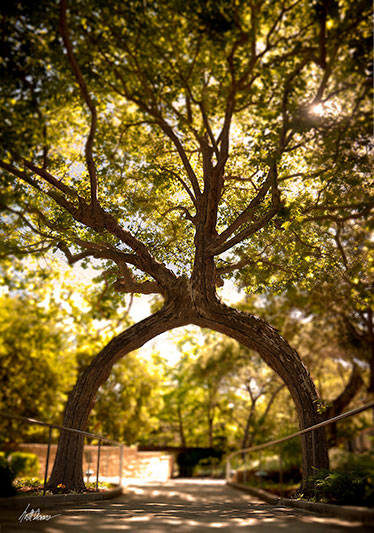 Erlandson was very secretive and refused to reveal his methods on how to grow the Circus Trees (he even carried out his graftings behind screens to protect against spies!) and carried the secrets to his grave.

The trees were later bought by millionaire Michael Bonfante, who transplanted them to his amusement park Bonfante Gardens in Gilroy in 1985. 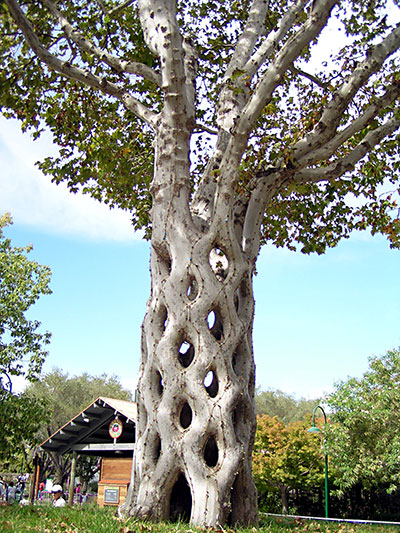 General Sherman is a giant sequoia (Sequoiadendron giganteum) tree located in the Giant Forest of Sequoia National Park in Tulare County, in the U.S. state of California. By volume, it is the largest known living single stem tree on Earth.

The tree was named after the American Civil War general William Tecumseh Sherman, in 1879 by naturalist James Wolverton, who had served as a lieutenant in the 9th Indiana Cavalry under Sherman.

General Sherman is approximately 2,200 years old – and each year, the tree adds enough wood to make a regular 60-foot tall tree. It’s no wonder that naturalist John Muir said: “The Big Tree is Nature’s forest masterpiece, and so far as I know, the greatest of living things.” 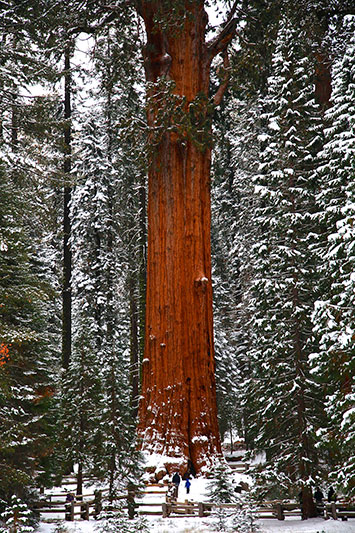 For over a century there was a fierce competition for the title of the largest tree: besides General Sherman, there is General Grant [wiki] at King’s Canyon National Park, which actually has a larger circumference (107.5 feet / 32.77 m vs. Sherman’s 102.6 feet / 31.27 m). Meet another sequoia species that quite remarkable: the Coast Redwood (Sequoia sempervirens), the tallest trees in the world. A tree called Hyperion in the Redwood National Park, identified by researcher Chris Atkins and amateur naturalist Michael Taylor in 2006 is the reigning champion. Measuring over 379 feet (115 m) tall, Hyperion beat out the previous record holder Stratosphere Giant [wiki] in the Humboldt Redwoods State Park (at 370 feet / 112.8 m).

The exact location of Hyperion has not been discussed by scientists. The terrain is difficult, and they don’t want a rush of visitors to come and trample the tree’s root system. 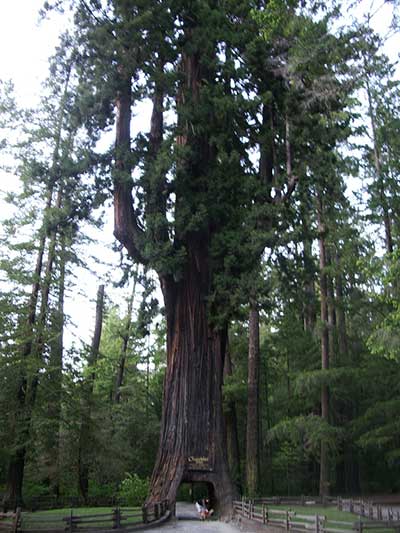 That’s not all that’s amazing about the Coast Redwood: there are four giant California redwoods big enough that you can drive your car through them!

The most famous of the drive-through trees is the Chandelier Tree in Leggett, California. It’s a 315 foot tall redwood tree, with a 6 foot wide by 9 foot tall hole cut through its base in the 1930s. The Chêne chapelle is an oak tree located in Allouville-Bellefosse in Seine-Maritime, France. It’s more than just a tree: it’s a building and a religious monument all in one.

The oak tree is between 800 and 1,200 years old. It is 15 metres (49 ft) high and its base has a circumference of 16 metres (52 ft). Its hollow trunk hosts two chapels, which were built there in 1669 and are still used: Notre Dame de la Paix (“Our Lady of Peace”) and the Chambre de l’Ermite (“Hermit’s room”). A spiral staircase around the trunk provides access to the chapels. 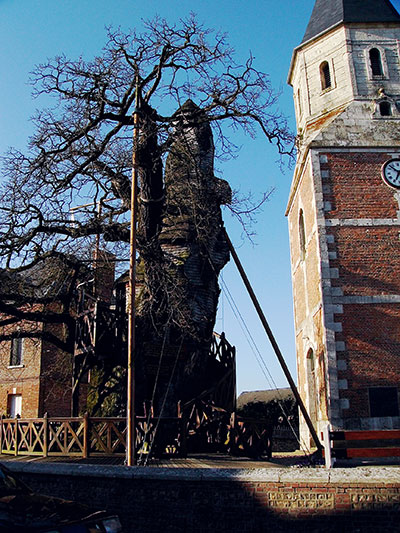 In 1669, l’Abbe du Detroit and du Cerceau decided to build a chapel in (at that time) a 500 years old or so oak (Quercus robur) tree made hollow by a lightning bolt. The priests built a small altar to the Virgin Mary. Later on, a second chapel and a staircase were added. 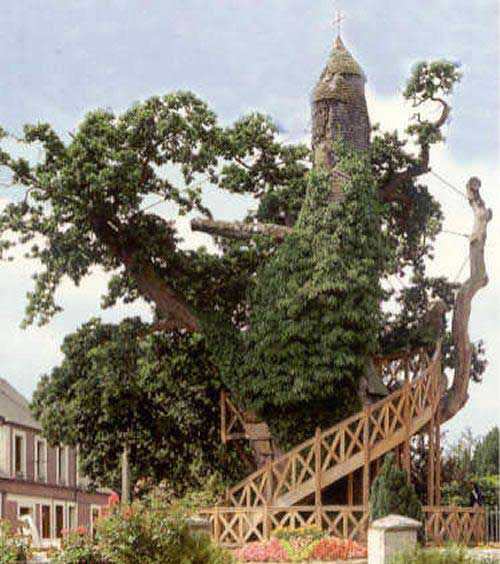 Now, parts of the tree are dead, the crown keeps becoming smaller and smaller every year, and parts of the tree’s bark, which fell off due to old age, are covered by protective oak shingles. Poles and cables support the aging tree, which in fact, may not live much longer. As a symbol, however, it seems that the Chapel-Oak of Allouville-Bellefosse may live on forever. Pando, also known as the Trembling Giant, is a clonal colony of a single male quaking aspen determined to be a single living organism by identical genetic markers and assumed to have one massive underground root system.

Pando, which is Latin for “I Spread,” is composed of about 47,000 stems spread throughout 107 acres of land. It estimated to weigh 6,600 tons, making it the heaviest known organism. Although the average age of the individual stems is 130 years, the entire organism is estimated to be about 80,000 years old!

Pando is thought to have grown for much of its lifetime under ideal circumstances: frequent forest fires have prevented its main competitor, conifers, from colonizing the area, and a climate shift from wet and humid to semi-arid has obstructed seedling establishment and the accompanying rivalry from younger aspens. The Tree of Tule is a tree located in the church grounds in the town center of Santa María del Tule in the Mexican state of Oaxaca, approximately 9 km (6 mi) east of the city of Oaxaca on the road to Mitla. The tree is an especially large Montezuma cypress which has the largest trunk girth at 190 feet (58 m) and trunk diameter at 37 feet (11.3 m). The Tule tree is so thick that people say you don’t hug this tree, it hugs you instead. 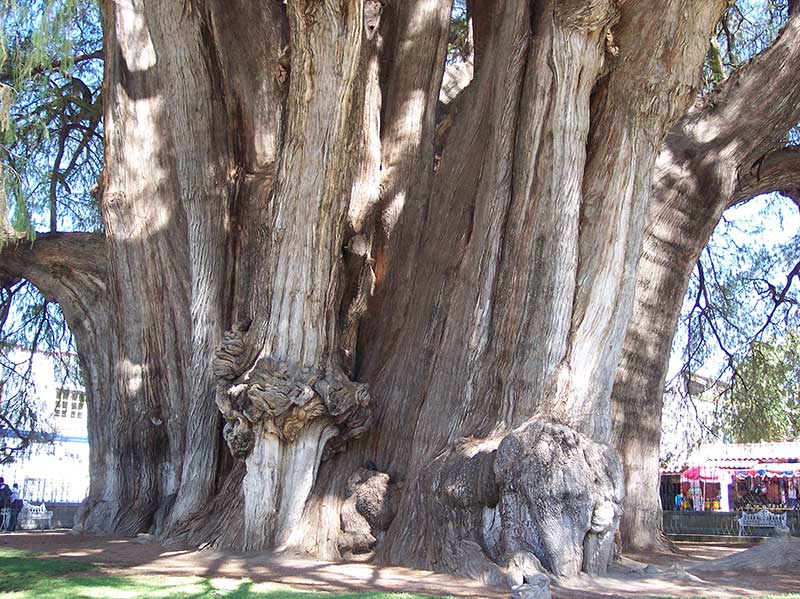 The age is unknown, with estimates ranging between 1,200 and 3,000 years, and even one claim of 6,000 years; the best scientific estimate based on growth rates is 1,433-1,600 years. Local Zapotec legend holds that it was planted about 1,400 years ago by Pecocha, a priest of Ehecatl, the Aztec wind god, in broad agreement with the scientific estimate; its location on a sacred site (later taken over by the Roman Catholic Church) would also support this. 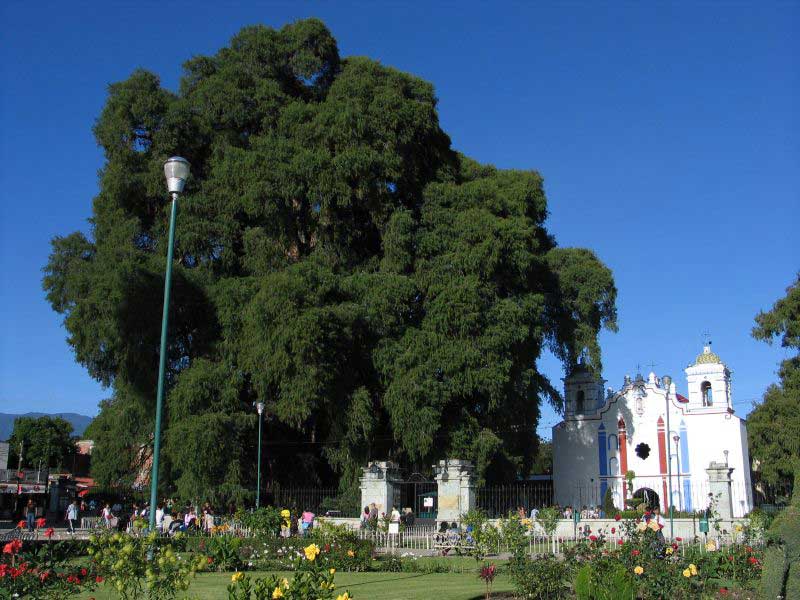 In 1990, it was reported that the tree is slowly dying because its roots have been damaged by water shortages, pollution, and traffic, with 8,000 cars traveling daily on a nearby highway. The Banyan tree is named after “banians” or Hindu traders who carry out their business under the tree. Even if you have never heard of a Banyan tree (it was the tree used by Robinson Crusoe for his treehouse), you’d still recognize it. The shape of the giant tree is unmistakable: it has a majestic canopy with aerial roots running from the branches to the ground. One of the most famous species of Banyan, called the Sacred Fig or Bo tree, is the Sri Maha Bodhi tree in Anuradhapura, Sri Lanka. Siddhartha Gautama, the spiritual teacher who later became known as Buddha, is said to have attained enlightenment under this tree. Planted in 288 BC, it is the oldest living human-planted tree in the world, with definitive planting date. 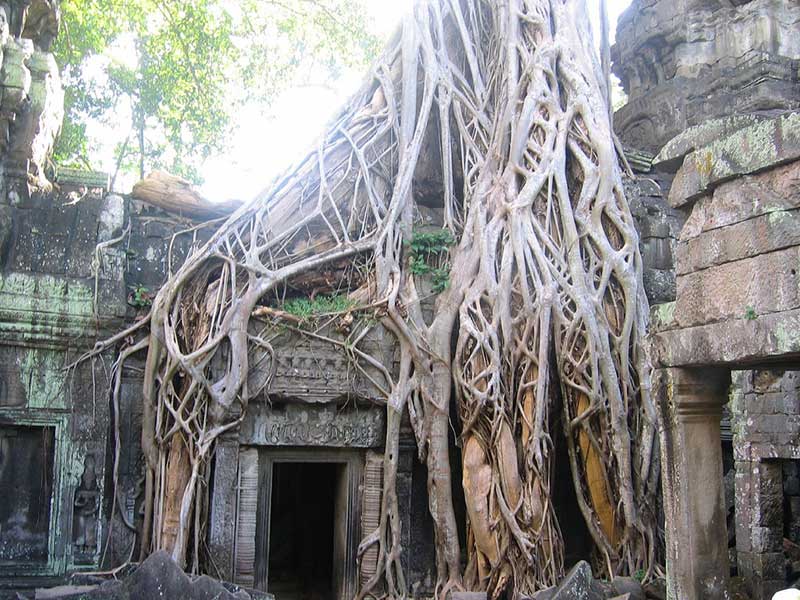 Methuselah is a 4,849-year-old Great Basin bristlecone pine tree growing high in the White Mountains of Inyo County in eastern California. For many years it was thought to be the world’s oldest known living non-clonal organism until it was superseded in 2012 by the discovery of another bristlecone pine in the same area with an age of 5,067 years (germination in 3050 BC).

The Methuselah tree, found at 11,000 feet above sea level, is 4,838 years old – it is not only the oldest tree but also the oldest living non-clonal organism in the world.

Then comes the story of Prometheus. It was the oldest known non-clonal organism, a Great Basin bristlecone pine (Pinus longaeva) tree growing near the tree line on Wheeler Peak in eastern Nevada, United States. The tree’s name refers to the mythological figure Prometheus, who stole fire from the gods and gave it to man. The designation WPN-114 was given by the original researcher, Donald Rusk Currey, and means it was the 114th tree he sampled in his research in Nevada’s White Pine County. 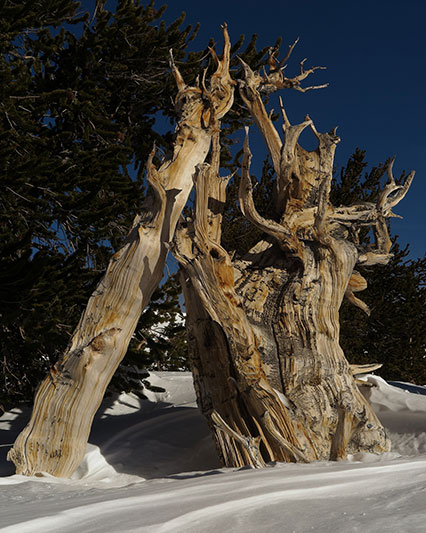 In 1964, Donald R. Currey, then a graduate student, was taking core samples from a tree named Prometheus. His boring tool broke inside the tree, so he asked for permission from the US Forest Service to cut it down and examine the full cross section of the wood. Surprisingly the Forest Service agreed! When they examined the tree, Prometheus turned out to be about 5,000 years old, which would have made it the world’s oldest tree when the scientist unwittingly killed it. A baobab is any of nine species of deciduous tree in the genus Adansonia, found in arid regions of Madagascar, mainland Africa, Arabia, and Australia. A baobab or monkey bread tree can grow up to nearly 100 feet (30 m) tall and 35 feet (11 m) wide. Their defining characteristic: their swollen trunk are actually water storage – the baobab tree can store as much as 31,700 gallon (120,000 l) of water to endure harsh drought conditions. 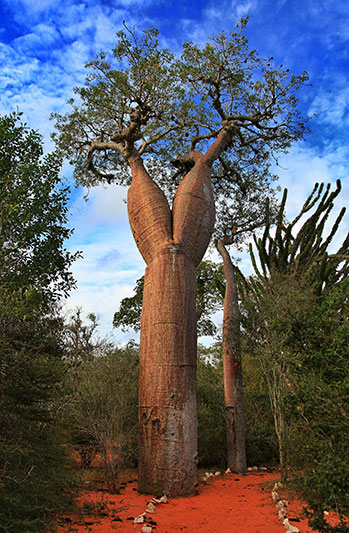 Adansonia trees produce faint growth rings, probably annually, but they are not reliable for aging specimens, because they are difficult to count and may fade away as the wood ages. Radiocarbon dating has provided data on a few individuals. A specimen of a digitata known as Grootboom was dated and found to be at least 1275 years old, making it one of the oldest known angiosperm trees.

There are many more trees that share unique names, history and beauty. But one thing they have in common is that they are hundreds years old. Each of them live to be watching over centuries of our generations. The existence of tree on this Earth makes the place pleasant. Hence, to keep this world friendly and pleasant, let us do take care of this legendary trees and begin planting new trees.